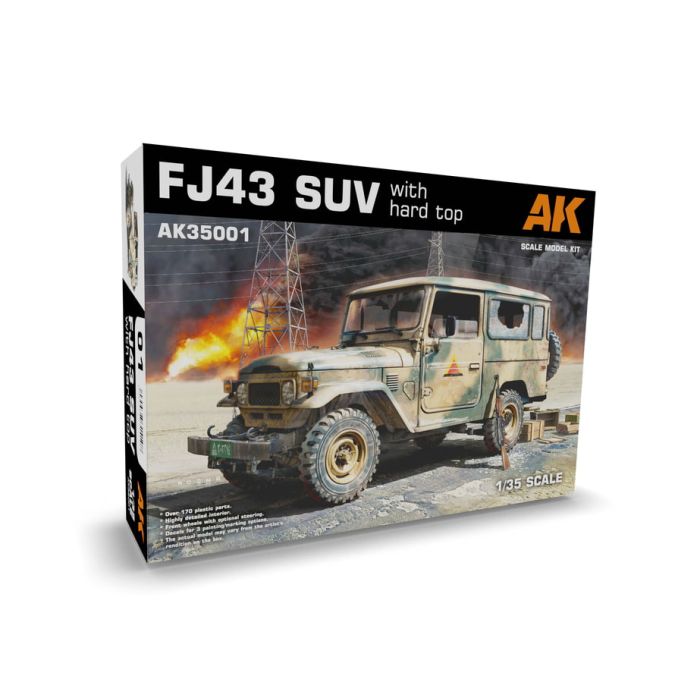 The FJ43 is part of the famous FJ40 series of 4x4s produced by the well-known japanese company since 1953. The J40 series was a tremendous best seller around the globe, helping to build the reputation of the japanese brand worldwide due to its sturdiness, economy and reliability. It was used for decades for military and civilian duties, and still remains service in across many countries. It has become an icon due to its popularity in many conflicts, even coining the term “Toyota Wars”. Fitted with weapons improved in many ways, it has proven its value as a capable vehicle in the most complicated terrain and tasks. This series had many configurations. Official and extra official ones. During the years the models had many changes and updates and is possible to see many vehicles with different parts, seats, wheels etc.

AK35001 is the HardTop version of the vehicle, probably one of the most popular variants in use. The top could be easily removed or refitted as conditions demanded, but it was a most useful asset under cold, rainy or dusty weather, both for military and civil users along the many decades of service of the vehicle. The modeler can make different changes in the kit and easy variations to match different configurations seen through the years in different conflicts or civil versions. Is perfect to build out of box or to update and adapt to our own version. This kit allows a multitude of possibilities.