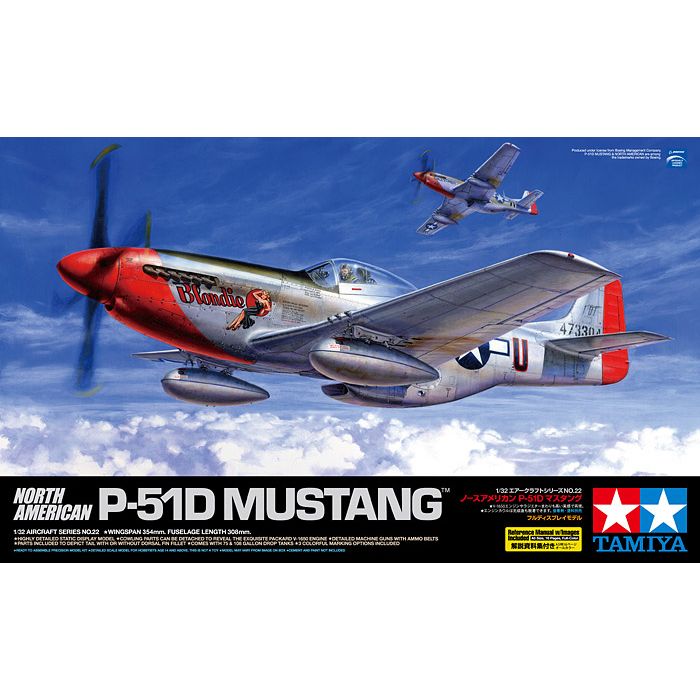 ?Famous form of the aircraft including its distinctive wing profiles have been precisely reproduced.

?Radiator components are reproduced just like those on the actual aircraft. Both the radiator flap and oil cooler flap are movable.

?You can select either early- or late-type tails, with the latter featuring the dorsal fin.

?Comes with 3 kinds of markings to depict aircraft from the U.S. 8th Air Force.

The P-51D Mustang is considered by many to be the best fighter aircraft of WWII. It incorporated advanced features such as a laminar flow wing and an efficient radiator design. Powered by the Packard-built Rolls-Royce Merlin V-1650 engine, it demonstrated superior performance and is widely considered to be the definitive variant of the Mustang. They were used to escort bombers such as B-17s and B-24s all the way to Germany and helped the Allies gain air superiority over Europe. Tamiya has reproduced this famous aircraft with utmost accuracy for addition to the 1/32 Scale Aircraft Series. The unmistakable form of the P-51D is accurately reproduced based on actual design drawings of the aircraft as well as thorough study of actual examples. Line it up with Tamiya's 1/32 scale Supermarine Spitfires and A6M Zeroes for a display of iconic WWII fighters.