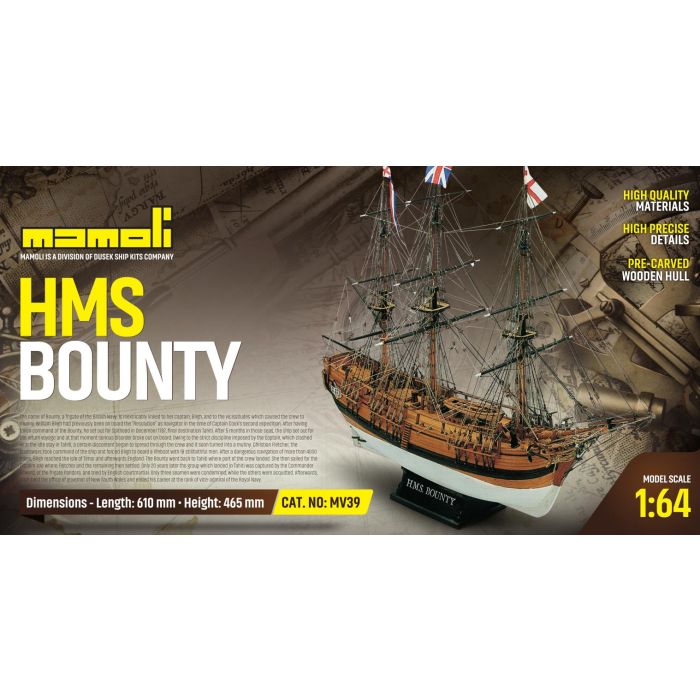 The name of Bounty, a frigate of the British Navy, is inextricably linked to her captain, Bligh, and to the vicissitudes which caused the crew to mutiny. William Bligh had previously been on board the 'Resolution' as navigator in the time of Captain Cook's second expedition. After having taken command of the Bounty, he set out for Spithead in December 1787, final destination Tahiti. After 5 months in those seas, the ship set out for the return voyage and at that moment serious disorder broke out on board. Owing to the strict discipline imposed by the captain, which clashed with the idle stay in Tahiti, a certain discontent began to spread through the crew and it soon turned into a mutiny. Christian Fletcher, the boatswain, took command of the ship and forced Bligh to board a life-boat with 18 still-faithful men.

After a dangerous navigation of more than 4000 miles, Bligh reached the isle of Timor and afterwards England. The Bounty went back to Tahiti where part of the crew landed.

She then sailed for thé Pitcairn Isle where Fletcher and the remaining men settled. Only 20 years later the group which landed in Tahiti was captured by the Commander Edward, of the frigate Pandora, and tried by English court-martial. Only three seamen were condemned, while the others were acquitted. Afterwards, Bligh held the office of governor of New South Wales and ended his career at the rank of vice-admiral of the Royal Navy.